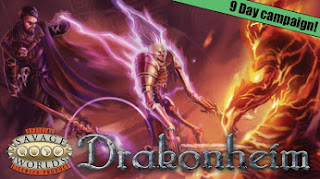 I first discussed Drakonheim on my blog at the end of August last year. Shortly after that I spoke to Matthew Hanson about adding Savage Worlds mechanics for it, and by the end of November I'd completed the first draft of a Savage Worlds companion. We then proceeded to fine-tune the companion in a series of back-and-forth emails, while I got to work on converting the adventures. Other than a final round of proofreading, the only thing needed now is artwork, which will be funded through Kickstarter.

The launch of the Savage Drakonheim Kickstarter was somewhat delayed (to avoid being overshadowed by Pinnacle's Savage Rifts Kickstarter), but last night it went live, and it's already hit its funding goal!

If you like my other work, I think you'll like this. If you're on the fence, why not take a look at the free previews for necromancy and sewer goblins, or download my free One Sheet adventure?

Brief Overview of the Setting

While most settings give you information about the overall world, Drakonheim details a single city and the surrounding area. This means you can slot it into other game worlds if you wish - or you can play it as its own medieval urban fantasy setting, with the entire campaign taking place in and around the city.

I've run urban fantasy campaigns before (they're a good way of dealing with players who keep dropping in and out each session, because you can just say their characters are busy elsewhere in the city) - and Drakonheim is a really good fit for that style of campaign, as there's a lot of political machinations going on between the various factions described in the book, so there's always plenty of potential plot hooks.

It's also worth mentioning that most of the characters aren't really "good" or "evil", they just have conflicting motives and a lot of personal ambition. An obvious example would be the Gray Society - the necromancers who used their undead to save the city from an invading army (although their motives were far from altruistic, and their means less than savoury).

Overall I really like the setting, which is why I offered to write the companion for it :)

Posted by Richard Woolcock at 01:19