I've recently been thinking about travel times - it's something I usually handwave, but sometimes it's important, even if only for narrative purposes. If I just make up journey times, it sometimes causes inconsistencies later on. But equally, I don't want to spend too much time calculating exactly how long each journey takes.

The discrepancy between the two isn't unreasonable, as the first situation represents movement over a very short period of time in the heat of combat, while the second is averaged over an hour of walking. However what it doesn't cover is characters who wish to push themselves harder and/or for longer.

I've decided to extend the movement by borrowing a concept from D&D: A character who "hustles" moves at twice their normal speed; characters are assumed to be hustling during combat, but if they wish to perform another action as well (such as attack) they can only hustle for half of their turn.

In Savage Worlds terms, this works a bit like the Defend maneuver: it only applies if you don't perform any normal actions. A character who wishes to move and does nothing else can double their Pace for the round.

However this raises the question of how running should work. I do think it's fine to have both - running is less reliable than hustling (because the additional movement is based on a die roll), but allows a character to perform other normal actions as well (one could draw parallels with Defend vs. Full Defense).

But if hustling represents a fast jog, and running represents combining fast movement with another action, what happens if someone just wants to run as fast as possible, and do nothing else? To address that, I borrowed another concept from D&D, which I call sprint.

There are now two additional maneuvers which any character can perform:

► Hustle: You can double your Pace for the round if you don't Defend or take any normal actions (you may still take free actions), as long as you're not Shaken. If you wish to perform normal actions while moving quickly, you should instead use the run maneuver.

► Sprint: This is a full round action (no other actions are allowed), and reduces your Parry by 2 until the beginning of your next turn. Your Pace is doubled and you roll (and add together) two running dice, but you must subtract your encumbrance penalty from the total. You must move in a relatively straight line, and cannot cross Difficult Ground. If you sprint for a number of rounds equal to your Vigor you suffer a level of Fatigue, and sprinting again for the same period of time causes a second level of Fatigue. You cannot sprint while Exhausted.

Note: If you're playing Shaintar, it already has a maneuver called All Out Move, so you can ignore sprint.

When travelling long distances, your Pace determines your hustling speed in miles per hour (e.g., Pace 6 can hustle at 6 miles per hour). Hustling represents a fast jog, and requires a Vigor roll once per hour to avoid Fatigue. You can hustle for up to eight hours per day, but must stop if Exhausted.

Walking is half the speed of hustling (e.g., Pace 6 can walk at 3 miles per hour), the same as in SWD, and there is no penalty for the first eight hours of walking per day. You can walk more than eight hours by making a forced march: make a Vigor roll for each additional hour, suffering a level of Fatigue on a failure. Incapacitation results in unconsciousness; it is literally possible to march until you pass out.

When riding a mount, it's the mount that makes the Vigor roll (and suffers the Fatigue) rather than the rider. A mount can even hustle when Exhausted, but if incapacitated by Fatigue (from either hustling or a forced march) there is a good chance the mount will die - roll to see if it survives as if the incapacitation were caused by damage. The rider must make a Riding roll to leap from their mount if it collapses; on a failure, they suffer 2d6 damage.

Characters only move at full speed when using a major highway, or when using a road or trail through a forest, moor or plain. When characters use roads through other types of terrain, or go off the beaten track entirely, they typically move at 75% speed, reduced to 50% when moving cross-country through deserts, forests, hills, mountains or swamps, or 25% when moving through jungles.

Flying creatures and aerial vehicles usually move at full speed, although strong winds and severe weather conditions can be treated as a 25%, 50% or 75% speed reduction. A tailwind can provide a bonus to Pace, typically +6 for a strong tailwind.

Similarly, swimming creatures and watercraft usually move at full speed, but can be slowed down by weather conditions. Sailing vessels can benefit from the wind and tides in the same way as aerial vehicles, while river boats gain a bonus to their Pace (typically +6) when moving downstream. A river boat can also float downstream without being actively rowed (i.e., it has base Pace 0, but with +6 for moving downstream), but still needs to be steered. Instead of acceleration and top speed, fantasy watercraft can simply be given a Pace the same as a creature. It is possible to hustle as normal using oars, but if the vehicle has sails the roll is instead made with Boating, and failure causes a level of damage to the boat or ship. It is also possible to push yourself in the same way as a forced march - this is always based on Vigor, but a crew can work eight-hour shifts to avoid fatigue (meaning that a sailing ship with a full crew doesn't need to take breaks).

Once you know how far the party can move per day, it's usually pretty easy to look at the map of your game world and see how long it will take to travel from A to B. To give an example, I've copied a tiny section of Shaintar's huge world map (with permission from Sean Patrick Fannon), which has a scale of 1.2 pixels per mile. The map is both detailed and clearly laid out, making it ideal for this sort of exercise. 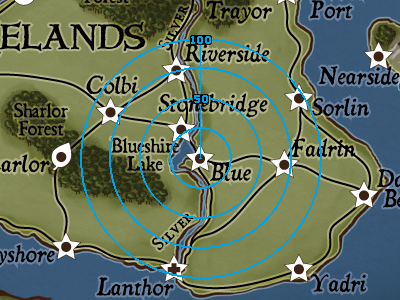 On top of the map I've positioned a ruler consisting of concentric circles, each representing a distance of 25 miles (I created the ruler specifically for the Shaintar map, so that it would match the scale). I prefer this style of ruler as it makes it easier to see the distances in all directions at once.

In this particular example, the PCs are located in the town of Blue. You can easily see at a glance that it's around 25 miles to Stonebridge, around 75 miles to Fadrin and Riverside, perhaps 80 miles to Colbi, and nearly 100 miles to Sorlin and Lanthor. Of course that assumes a straight line, but in most cases there are roads which are (more or less) straight. Even if the PCs wish to visit Sorlin, it would probably be faster to take the road (via Fadrin) rather than walking in a straight line across the plains.

The speed of the group will obviously depend on their slowest member:

• Aevakar (flying Pace 12) can fly 48 miles per day* regardless of terrain.

If the group wants to head to Stonebridge they can probably make it in a day (in which case they wouldn't need to make camp for the night, so it would effectively become an 8 hour trip). Even dwarves could probably manage it in a day if they didn't mind pushing themselves a bit to keep up - either hustling for a couple of hours, or turning it into a 10 hour trip (or a combination of the two).

But what if the PCs want to head all the way down to Lanthor? That's nearly 100 miles, and would take a group of humans about 4 days on foot. With horses they could make it in 2½ days. But there's a third option - the Silver river. Rafts only have Pace 1, but they receive +6 Pace for moving downstream. If the PCs row the raft for 8 hours (Pace 1+6) and then just let it float for the remaining 16 hours, they'll travel 80 miles in a full day! They should arrive in Lanthor a few hours into their second day of travel.

* The Draft Rider Edge (which allows the Aevakar to fly 100 miles per day) can also be justified within these guidelines as a "forced march" - the benefit of the Edge is that the Aevakar no longer needs to make a Vigor roll every hour to avoid Fatigue.

Posted by Richard Woolcock at 13:53