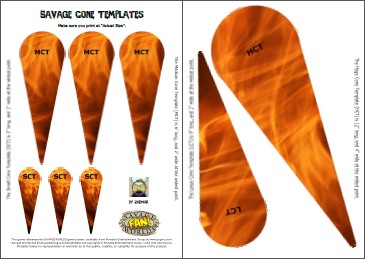 However there is only one Cone Template, which is 9" long and 3" wide at its widest point (effectively a cone ending in a 3" diameter semicircle). This gets used for all sorts of things, such as flamethrowers, breath weapons, elemental attacks, certain offensive powers, flashlights and bullseye lanterns, and so on - the Horror Companion even uses it for sprays of blood! In short, every effect which is cone-shaped uses the same Cone Template.

While converting D&D spells for my Vancian magic system, I found that while many of the spells filled a "radius burst", and could be handily represented through the three Burst Templates, there were also quite a few that filled a 15, 30 or 60 foot cone (the Savage Worlds Cone Template is the equivalent of a 45-foot cone). So I finally decided it was time to add some more Cone Templates.

Although the Cone Template is often compared with the Medium Burst Template in terms of value (probably because it covers a fairly similar area), I decided not to simply halve its length and width to create the Small Cone Template, as I didn't want a template 4.5" long and 1.5" wide. Instead, I decided to split it into four templates as follows:

As far as what the new templates are used for, that's entirely up to you.  New spells?  Miniature flamethrowers?  Differently sized breath weapons for younger and older dragons?  I'm sure you must have some ideas!

Posted by Richard Woolcock at 07:37