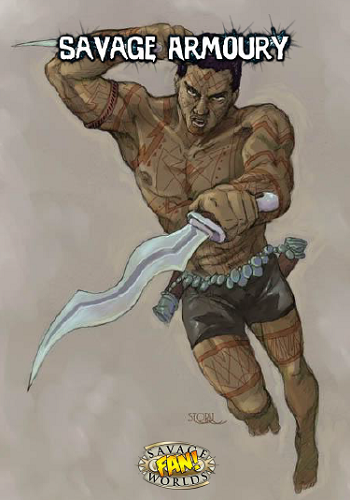 The first "toolkit" PDF I created for Savage Worlds was Savage Armoury, a set of guidelines for designing and balancing weapons and armour. It's since gone through a number of updates and improvements, and the page count has more than doubled since the original version. Of the many PDFs I've released, it still seems to be one of most (if not the most) popular.

It's been over a year since I last changed it, but some recent feedback on the Pinnacle forums convinced me that it needed a minor update.

The Natural Weapons Edge now gives the Light ability for free. The truth is I was never entirely happy about forcing people to spend weapon ability points, but one of my goals was that Natural Weapons should be backward compatible with Martial Artist, so I fudged the numbers a bit by requiring people to spend a point on Light. However Sitting Duck on the Pinnacle forums pointed out something that I'd overlooked: Martial Artist also has the option of performing nonlethal damage without a penalty to the attack roll. This means Light can be turned into a freebie, and recreating Martial Artist now requires Always Ready, Low Damage and Optionally Nonlethal.

This also made me realise that I hadn't taken into account other blunt weapons being able to inflict nonlethal damage without penalty. Even in earlier versions of Savage Armoury, I'd listed that option as a +1 ability, but I'd never factored it into any of the predefined weapons. Should I update them all? I considered it, but in the end decided it should remain optional - generalisations such as "all blunt weapons" don't really belong in Savage Armoury, as it breaks down each weapon into individual abilities.

However I did update the Nonlethal Weapons section to clarify how the option works, and change the baton in the Equipment List at the end of the document to use Optionally Nonlethal (I also removed the AP -1, and lowered the damage to d4, bringing it in line with the SWD baton).

Finally, I updated the description for reinforced armour and helmets to clarify that they're bypassed by a raise on the attack roll, after someone asked whether it referred to the damage roll.

Posted by Richard Woolcock at 02:34