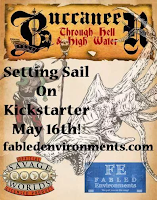 Fans of "Pirates of the Caribbean" should keep an eye out for the new Kickstarter from Fabled Environments and Yellow Piece Games, which is due to launch tomorrow. Fabled Environments have produced some interesting settings in the past, but they're also known for publishing detailed maps, which hopefully means the setting will include some great custom maps.

They've also hired Rick Hershey of Fat Goblin Games to do the artwork! Rick is one of my favorite RPG artists (he also created most of the artwork for Saga of the Goblin Horde).

The team includes Savage Worlds veterans Christopher "Savage Bull" Landauer and Chris "Savage Mommy" Fuchs from the SavageCast podcast, so the mechanics should be solid - I know they've discussed in the past that they plan to treat ships as characters (Savage Space did the same thing, and it worked exceptionally well, so I definitely think they're on to something). Apparently they also have some interesting new rules for ship battles.

The 50 Fathoms setting never really did it for me (although the Plot Point Campaign itself was well designed, I didn't like the thematic blend of Earth nationalities in a fantasy world), while Pirates of the Spanish Main feels a bit dated (probably because it's ten years old, and was designed as a standalone product, so it still uses a much older version of the rules). I think a good pirate setting is well overdue, so I'm interested to see what comes of the project.

Hopefully we'll get to see more teasers as the Kickstarter progresses!

EDIT: The Kickstarter has now launched, check it out here!

Posted by Richard Woolcock at 07:39