Root of the Problem: One Sheet 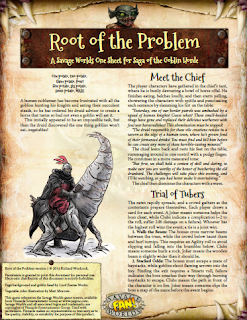 A nobleman has become frustrated with all the goblins hunting his knights and eating their succulent steeds, so he has ordered his druid adviser to create a horse that tastes so bad not even a goblin will eat it.

This initially seemed an impossible task, but then the druid discovered the one thing goblins won’t eat...vegetables!

Here's another One Sheet for Saga of the Goblin Horde:

Root of the Problem

Posted by Richard Woolcock at 15:57

Email ThisBlogThis!Share to TwitterShare to FacebookShare to Pinterest
Labels: One Sheet, Root of the Problem, Saga of the Goblin Horde, Savage Worlds, SotGH