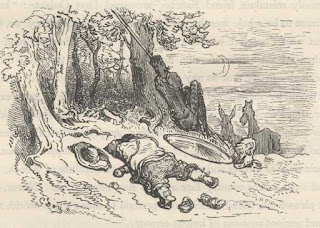 There are no official rules on how to handle sleeping and waking,[Reference] although it's a subject that occasionally comes up during play. The closest we have to an official ruling is the Slumber power, which allows sleeping victims to make an unmodified Notice roll to wake up if they hear a "loud noise". Clint has also suggested that some GMs might choose to allow a Notice roll with a penalty if the sneaking character doesn't achieve a raise on their Stealth roll.[Reference]

When sneaking up on a sleeping guard, a failed Stealth roll indicates that you've made a noise, and they can make a Notice roll at -2 (the sleeping penalty): On a success they wake up and become inactive guards (they assume they just woke up naturally), while on a raise they wake up and become active guards (they know that a noise woke them up and are therefore more alert).

When taking the Last Step, if you don't achieve a raise on your Stealth roll then a sleeping foe can make an opposed Notice roll at -2 (the sleeping penalty). Of course even if they wake up, they will almost certainly be Prone and (unless they have natural weapons) count as an Unarmed Defender, at least until they've had their first action. Sleeping while on guard duty is a bad idea!

Note that the sleeping penalty should not apply to the Notice roll for Danger Sense. A sleeping character who successfully uses Danger Sense automatically wakes up and acts as if they'd been awake to start with.

Deep Sleeper (Minor)
You're a very heavy sleeper, and find it difficult to wake up. The penalty you suffer to Notice rolls while sleeping is increased to -4, and you cannot make opposed Notice rolls against the Last Step. A character with this Hindrance can never take Light Sleeper.

Light Sleeper (Background)
Requirements: Novice, Notice d6+
You sleep very lightly, and are always alert when you wake up. You ignore the -2 penalty to Notice rolls for sleeping. Furthermore if someone attempts to sneak up on you while you're asleep and fails their Stealth roll, a normal success on your Notice roll causes you to wake up and become an active guard, while on a raise you also wake up on Hold.
When someone uses the Last Step against you, you may always attempt an opposed Notice roll, even if they succeeded with a raise on their Stealth roll. If you win the opposed roll you wake up and spot them, while beating them with a raise means you also wake up on Hold (and can attempt to immediately interrupt them if you wish).

Posted by Richard Woolcock at 08:31