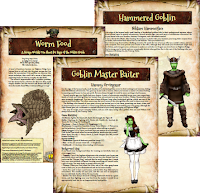 This Thursday at 7pm GMT (3pm EST), Veiled Fury Entertainment will be running a Savage Worlds Actual Play, live on Twitch. Starring the infamous hosts of the TableTop Twats Podcast, this promises to be an epic tale filled with massive monsters, greased-up goblins, casual cannibalism, and wily wabbitfolk!

They've come all the way from Hightree Ridge, enticed by the promise of fame, glory, and as many humans as they can eat. Meet Hammy Groingazer and Niklam Hammerface, the brutal borderland brothers, known among the tribes as the Treetop Twits!

Watch with delight as they attempt the most insanely dangerous stunt they've ever undertaken. Laugh at their expense as they become...

Veiled Fury Entertainment will also be releasing the adventure at the end of the show, so if you fancy adding another Saga of the Goblin Horde One Sheet to your collection, make sure you tune in!
Posted by Richard Woolcock at 13:42