Shaintar: Only 1 day left to back the Thundering Skies Kickstarter! 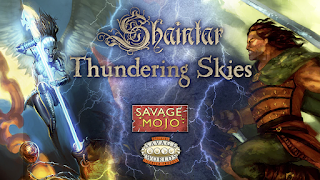 If you're into Savage Worlds and epic fantasy, Shaintar is a must-have for your RPG collection. The players take on the role of powerful heroes, battling against the forces of darkness in a classic tale of good vs evil.

The setting itself is very rich and detailed, with lots of supporting material, but the main downside was always the lack of a Plot Point Campaign. Of course you could always make up your own adventures, but there was so much background information that I found it quite overwhelming to know where to start, and there weren't enough examples for me to get my head around the appropriate style of play; Sean Patrick Fannon even described one of my early games as "the most un-Shaintary experience I've ever read about happening in Shaintar"! :P

Fortunately Savage Mojo are now running a Kickstarter for Thundering Skies, a full Plot Point Campaign for Shaintar - and as an added bonus, they're giving every backer a free copy of both Players Guides (Legends Arise and Legends Unleashed). This is a great opportunity for newcomers to the setting, it's the one thing I really wish I'd had when I first started running Shaintar.

If there was ever a Savage Worlds setting that deserved its own Plot Point Campaign, it's Shaintar.

I backed the previous Shaintar Kickstarter back in 2013 (the highest pledge I've ever made for a Kickstarter project). I also wrote an adventure generator and character builder for Shaintar, and as a thank you, Sean allowed me to design a new town for the setting (I invented the town of Stonebridge in the Freelands). Hmm, maybe I should write a fan One Sheet set in Stonebridge...

Posted by Richard Woolcock at 07:46