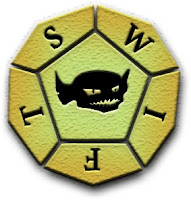 I started this blog two years ago today, with a series of posts about converting We Be Goblins from Pathfinder to Savage Worlds. My first post provided stats for a set of goblin PCs, so I thought I'd do the same thing again, except this time for Saga of the Goblin Horde, and for characters converted from Savage Worlds to Swift d12 (the new system I've been working on).

Obviously I will release a full set of archetypes in the future, but that's still a little way off.

I've currently chosen to keep a similar statblock style as Savage Worlds, so that I don't have to completely overhaul the document layout when I create the Swift d12 version of the setting.

Swift d12 has six primary abilities, and for Saga of the Goblin Horde these abilities are Strength, Agility, Endurance, Cunning, Instincts and Dominance (they'll likely be renamed for other settings). An average person has +0 across the board, and starting PCs have a total of +2 split among their primary abilities. I only list abilities that aren't +0.

There are also two secondary abilities, Combat and Magic, which are increased by the Scrapper and Sorcerer Feats respectively. Scrapper, Sorcerer and Savant are the three Class Feats; PCs start with one Class Feat, and gain another Class Feat every 4 levels (Class Feats can also be taken multiple times).

Each ability has four skills, and these are added to the associated ability when making an ability check. For example, if you have Dominance +1 and Diplomacy +2, and needed to make a Diplomacy check, you would roll d12+3 and require 7+ (called "Lucky 7", because I like memory hooks) to succeed.

There are four ways to get skill points. The first is from your race, the second is by taking Handicap Flaws, the third is with the Skill Focus Feat, and the fourth is with the Savant Feat. Savants are the "skill monkeys", and tend to excel in their areas of expertise.

Usually you can only have a maximum bonus of +2 for a primary skill and +1 for a secondary skill, however Savants can have twice that amount in their specialties.

There are four derived traits: Speed (how many feet you can move per round), Resilience (how difficult you are to injure), Capacity (how many significant items of encumbrance you can carry without penalty) and Leadership (how many gang members you have).

Each character starts with two Major, four Minor, or one Major and two Minor Flaws. Flaws are categorized as either Handicaps (they give a mechanical drawback) or Quirks (purely roleplayed). Handicaps grant a +1 or +2 bonus to a skill of your choice.

Posted by Richard Woolcock at 14:58