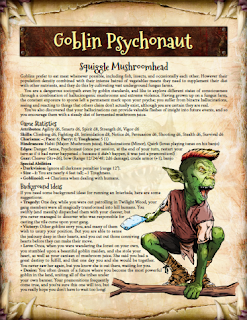 I had originally planned to release the Barghest Whelp archetype for October, but last month Rick Hershey started a new Fantasy Character Subscription, and as he was accepting suggestions I proposed a goblin - which he promptly added. So I decided to use it for the October archetype.

So here is the eleventh archetype: the goblin psychonaut!

This particular archetype is a tribute to my friend David Teeder, who played a character called Squiggle on my MUD many years ago (the hair is inspired by his real haircut!).

As usual you can get the archetypes from here, and the three One Sheet adventures here, here and here.

The fourth One Sheet, Samhain Surprise, will be released on Monday. Frank Turfler of Middle Kingdoms Adventure & Trading Company is creating a set of free maps to go with the adventure, and has already released the first two here and here. The third and final map will be released on the same day as the One Sheet.

Posted by Richard Woolcock at 15:57